'Just Barely Good Enough', or JBGE, is the idea that there is a sweet spot for task completion in terms of effort and value.  If a task is completed without enough effort, then the value of that effort will be diminished by time spent resolving issues and/or rework needed.  If a task is completed with more effort than what was actually required the value of the added effort suffers diminished returns. 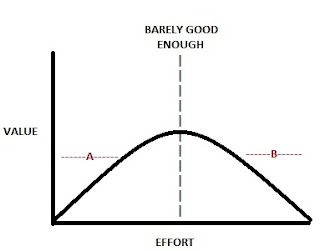 In my 20+ years working in the IT industry (it pains me that I can say that) I have observed there are 2 types of workers that stand out and they are represented in the chart above as 'A' and 'B'.

The A's tend to be either junior level/less experienced workers or experienced workers that lack passion for quality.   A's can be perceived and highly regarded by management as someone that get's things done.  In reality an A can be a ticking time-bomb.  They routinely throw work over the wall that doesn't qualify as "good enough", but it's not always obvious at the time.  Months later major incidents occur because the lack of effort when the task was delivered.  Some A's learn from these experiences and over time may shift towards a 'B'.  A's that never learn and continue this behavior eventually find themselves near or on the chopping block.

B's are often your senior level/more experienced workers or a less experienced worker that is just extremely thorough and cautious by nature.  B's are often the individuals with a deep understanding of the environment beyond their specific specialization.  Peers and management alike seek to have a B help drive direction based on their knowledge and experience.  B's are also the reason your 5 month project is still in the design phase at month 4.  B's pride themselves on bullet proof designs and will take the time to plan for handling every possible failure regardless of what the real impact to the company would be.  B's are often accused of over analyzing.

As I do believe most people gravitate to being either an 'A' or a 'B', there are some workers who are sometimes an 'A' and sometimes a 'B'.  Someone might gravitate to 'B' tenancies when working on a project they have a passion for while behaving like an 'A' when they are not excited about their task at hand.  Maybe you even have the diamond in the rough that is great at finding the JBGE point in their work.

Achieving JGBE with A's and B's

A potential path to achieving JBGE is refining how the workers and their work are managed.  Tasks are often assigned to workers without definitions for success criteria in place.  Without success criteria defined a worker is left to decide that for themselves.  An 'A' will wash a car with cold water and no soap while a 'B' will wax the car and maybe even repair a scratch in the paint and oh!... there's a dent they could pound out.

The definition of 'good enough' will change from task to task.  Sometimes 'good enough' will require minimal effort while another task may have no room for error.  With proper guidance, both 'A's and 'B's can both be extremely valuable to the success of a project.

Email ThisBlogThis!Share to TwitterShare to FacebookShare to Pinterest
Labels: process

Wakey Wakey My very last morning waking up in Seattle and I finally sleep until my alarm goes off.  It was a bitter sweet morning.  On one... 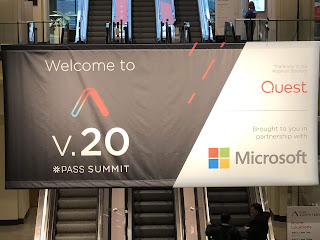 Kimberly
I have been working in IT for 20+ years. I have a passion for databases and would like to share my passion with others who feel the same as I do!